The SDIO camera "Veo 130s". It was an amazing mobile photo camera with 1280*1024 px for that time! Actually, this is the camera for Pocket PCs and never sold like the "PalmOS camera". It has only one experimental driver for Palm T, T2, T3, and C only. 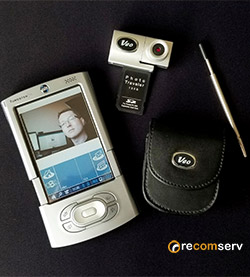 The 130S has a 1.3-megapixel camera, so the largest pictures it can take are 1280 by 1024 pixels. It can take smaller ones as well, handy if you want to save memory or email your pictures.

You arenít limited to just pictures; you can also record videos with sound. These can be as large as 320 by 240 pixels.

The lens can swivel, allowing it to point at either you or whatís in front of you. Your handheldís screen acts as the viewfinder and youíll tap an on-screen button to snap a picture or start and stop recording a video. 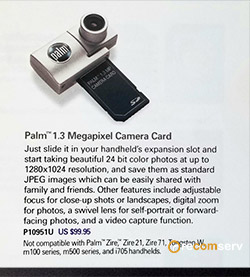 Images and videos are stored as JPEG and AVI files, respectively. Once youíve taken a picture or video, of course, you can view it on your handheld and delete it if you donít like it. 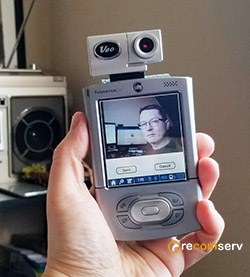